He wants to come, or they told us so?!

Who do you believe? Read the following; 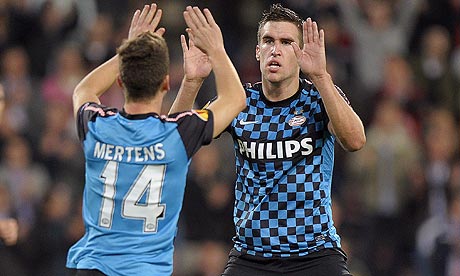 Who do you believe? Clean Sheets tell us also on Wednesday “Manchester United linked with summer move for Dutchman “.

Sportsvibe tell us on Wednesday also United are linked with a move for Uruguayan starlet.

Here is the City confirm the story “Kevin Strootman open to possible move.

Not to be outdone the Bleacher Report on Tuesday and inform us “Ryan Shawcross potential Man Utd transfer in doubt.

Give me Football offer up this on the 24th ” Top 5: Potential ‘ major signings ‘ for Manchester United.

Thisfutbol on the same day tell us “Forget Moura, this is the prodigy Manchester United should snap up.

Tottenham Hotspurs battle Manchester United to sign Borussia Dortmund star Ilkay Gundogan was an offering from the Daily Star on the 21st of October!

Here is the City, analyze 10 players linked with signing for Manchester United this week on Sat 20th of October.

Caught Offside again on the Friday 19th of October informs us, Man United interested in re – signing Stoke City centre back Ryan Shawcross.

Not to be outdone, Talk Sport also on Thursday 18th of October explains Five wingers Man United could sign in the transfer window.

Serie A giants battling to sign Man Utd winger courtesy of the Kenyan Post on 18th of October.

Manchester United latest: Including move for Wayama and Nani’s exit route. Here is the City .Wed 17th of October.

Manchester United target three signings in what could be a busy January. Sportsvibe 16th of October.

In the last 6 years Manchester United have signed 3 players in the January transfer window!

It’s only late October, who will United sign in this winter window?