United Sink to Defeat at Swansea! 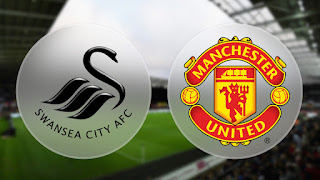 This was Louis van Gaal’s 50th match in charge of United and against opponents who not only ruined his unveiling as the new manager of the Red Devils but went on to take six points off the Old Trafford outfit last season.

Swansea has proven that they are a tricky opponent and are difficult to play against especially on their home turf, but United are a different team compared to the previous campaign and are at last starting to find their rhythm after the new signings have started to get used to the level that they are expected to play at for United.

After the success of qualifying for the Champions League group stages and being placed in what seems a relatively easy group the away side were on a high going down to South Wales and why not? Wayne Rooney was back among the goals after his European hat-trick against Club Brugge, Ander Herrera repaid van Gaal’s faith in him with a goal in his first start of the season and Fellaini was available after completing his three-match ban.

The biggest question was whether United could take their Champions League form and goals into the Premier League against sterner opposition. The answer was a resolute no as Swansea once again took advantage of a lacklustre United and claimed another victory.

The only absentee for the game was Adnan Januzaj who had picked up an injury, but this provided another chance for Herrera as it meant he could stake a claim for his place in the team as the number 10. Marcos Rojo was still unavailable for selection but is almost ready as he came through 60 minutes in a behind closed door match against Ajax this week.

Herrera kept his starting place while Schneiderlin and Scweinsteiger returned to the midfield. Meaning Carrick would start on the bench.

United got the match underway with the backing of the away fans ringing in their ears. The away side started the match brightly on the attack and were awarded a free kick in the very first minute, which Memphis hit low towards the corner but, the Swansea keeper Fabianski was alert to the danger and saved low.

Then a nice run on the left by Memphis almost produced an opening for Mata but after a neat exchange of passes the Spaniard fired his shot high and wide. 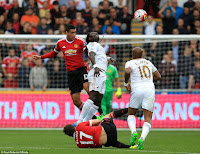 In the first quarter of an hour Swansea kept hitting the ball over the top and each time Smalling was there to clear up continuing his improved form. It was pleasing to see that when the home side did attack United defended as a unit with all the players helping out to regain possession.

United had two chances to take the lead within a couple of minutes half way through the half when first Rooney was put through on goal by a superb threaded pass by Shaw but the striker was caught up by defender Williams who managed to get a toe on the ball before the captain could pull the trigger, this was followed by a great chance which fell to Mata, who was lurking unmarked on the right of the box. He picked up the pass from Herrera and when it looked odds on a goal he blasted his effort wide. Poor from Rooney and Mata.

It wasn’t all United as Swansea had their own chances to go ahead, first with a shot by Gomis followed by a glaring miss by Sigurdsson and an attempted lob by Shelvey which Romero managed to get back and catch on the line. 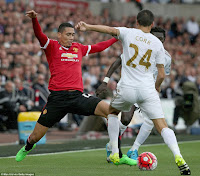 On the half hour mark United were living dangerously and struggling to contain striker Gomis, who was unlucky when his shot hit the post. Rooney had another chance to reedem himself, however his attempted lob over the keeper was weak to say the least, yet another chance had gone begging in a half that was a hard fought affair. Herrera hit a right footed shot from the edge of the area which he pulled wide.

United saw out the last five minutes of the half in control after the home side had a period of ten minutes of threatening attacking play.

An uninspiring first half summed up by the lack of atmosphere inside the Liberty Stadium as both sides were badly let down by their finishing. The main culprits for United were Memphis and Rooney, who had obviously left his scoring boots back in Belgium after his heroic hat-trick and both Mata and Herrera really should have done a lot better with their shots that weren’t even on target.

Both Schneiderlin and Memphis received cautions the Frenchman after a needless tackle and the Dutchmans’ booking seemed to be a harsh decision by the referee.

More was expected in the second half from United and that’s exactly what they delivered with a goal by Mata after only three minutes of the restart. The goal was created by Luke Shaw as he made a run down the left wing and powered over a cross which eluded Rooney, but found Mata at the far post and the Spaniard didn’t miss this time as he fired home the opener. Superb play by Shaw, who continues to impress this season.

A Memphis cross was almost deflected into his own net by Williams but his keeper managed to save the defenders embarrassment.

The goal seemed to reinvigorate United and the ground filled with the away fans celebrating with chants for the goal hero Mata. The goalscorer had a chance to double the lead just before the hour mark, but he couldn’t find a way past the keeper when one on one, then within seconds Rooney gave away the ball while on the attack and Swansea went straight down the other end and equalised through Ayew.

Captain Rooney has to hold his hands up and take the blame for the goal as it was his mistake that led to the home side breaking forward and making the match all level and in turn ensuring United lost their clean sheet in the Premier League.

Then disaster in the 66th minute when Swansea took the lead through Gomis, who stole in-between Smalling and Darmian to latch onto a through ball and tuck it away past Romero at his near post.

The Argentinian keeper has to take some of the responsibility for the goal as he shouldn’t be as easily beaten from that type of angle as he was. What a difference a goal makes as Swansea were buoyed by their earlier equaliser and United seemed to have had the stuffing knocked out of them.

Louis van Gaal decided that a change was needed and replaced Mata and Schneiderlin with Young and Carrick for the last twenty minutes of the match. United tried to come up with the goods but failed to deliver the strike that would have given them hope.

The final change for United saw Herrera make way for Fellaini who took up his position up front with the hope of causing havoc in the home defence.

With ten minutes left on the clock it was increasingly difficult to see where United’s equaliser would come from as they struggled to put any moves together that troubled Swansea’s defence.

Rooney had the last chance at the death, but after showing superb control to bring the ball under control from over his shoulder, he then took one too many touches before losing the ball even though he claimed incorrectly that he was fouled.

That chance summed up the captain’s day as he reverted to his lacklustre style of play where he looked distinctly off the pace and didn’t show the leadership qualities that United badly needed. His last chance was similar to the own goal in the opening game against Spurs where he dithered on the ball in the box, but this time the defender didn’t put the ball in his own net.

The match ended in a repeat of last season and Swansea are quickly becoming Louis van Gaal’s bogey side . A disappointing result but one that Louis van Gaal and his staff have time to remedy as there will no matches this coming week due to Internationals. Let’s hope that no player receives any injuries while away with their home countries.

This week saw the departures of two defenders from Old Trafford Jonny Evans and Tyler Blackett. Evans has joined West Bromwich Albion for an undisclosed fee, but which is thought to be around £8m. He leaves Old Trafford after an 18 year association and with three Premier League titles and two League Cup medals. Blackett has joined Scottish giants Celtic on a season long loan which can only improve him as a player and hopefully when he returns, he and United will both benefit from the valuable experience. Good luck to both.

As regards new players arriving there’s not that much time left. It’s clear United need more firepower up front as they are thin on the ground when it comes to players to put the ball in the net and with four trophies to play for this season if van Gaal thinks he doesn’t need another striker then he is greatly mistaken.

As Sir Alex Ferguson believed, quite rightly, that a team needs four recognised strikers in their squad to be able to compete at the highest level and United do not have that number, so let’s see what the next couple of days brings.

The goalkeeper situation needs to be resolved and although Rojo is making strides the defence United could do with one more experienced center back.

There is an international break over the next week and then United have a small matter of Liverpool at Old Trafford.