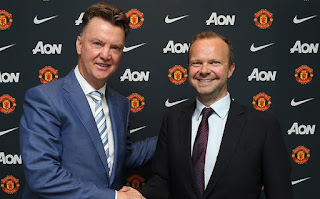 United didn’t end up signing Uncle Tom Cobley but if the media had had anything to do with it, they would have along with all of his family.

It was a summer that started so hot for the reds with the transfer window kicking off with a flurry of scorching hot new arrivals at Old Trafford followed by a midsummer of lukewarm speculation and ending with a little sizzle.

In total Louis van Gaal and Ed Woodward signed six new players that they hope will take the team forward and to balance the books released a number of other players either on loan or moved on to pastures new. 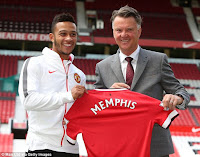 The first in the door at Old Trafford was the exciting young Dutch player Memphis Depay. So hot was he that even Louis van Gaal admitted that he approved the transfer of the PSV winger before the transfer window opened because of strong interest from sides like PSG.

Once the sale of the hugely ineffective Angel Di Maria to PSG had been finalised Memphis took over the iconic number 7 shirt worn with pride by such legends as Best, Robson, Cantona, Beckham and erm Owen! If the flying Dutchman reproduces the form he had shown at PSV then the United fans are in for something special. 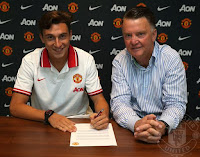 Next to arrive was a player not widely known in England, but Italian right-back Matteo Darmian was certainly popular in Italy having played for Torino in 146 appearances and represented his home country at the last World Cup in Brazil.

A strong full-back with the ability to play across the back line and renowned for his attacking qualities, his signing was somewhat out of the blue, however if his performances at the start of the season are anything to go by then this could end up being van Gaal’s best piece of business.

Darmian’s arrival meant that fans’ favourite Rafael was surplus to requirements and was sold to French outfit Lyon. Rafael will be missed as he was a player who was loved by the faithful for his no-nonsense displays and his scuffles with Liverpool.

This was followed by a double shot in the arm for United as both Morgan Schneiderlin and the German play maker Bastian Schweinsteiger joined United on the same day to boost the midfield.

Schneiderlin was bought from Southampton where he had been a loyal servant to the Saints since 2008 helping them return to the Premier League from league 1 via the championship.

A midfielder who goes about his job efficiently and will provide the much-needed bite to the middle of the park that has been lacking. Schneiderlin even managed to score a goal on his debut for United on the tour of the USA.

Bastian Schweinsteiger arrived at United from Bayern Munich to renew his partnership with van Gaal from their time together at the Bavarian club. This had to be the highest-profile signing of the summer for the Red Devils and one that had the fans licking their lips in anticipation of what the World Cup and Champions League winner would bring to the club. 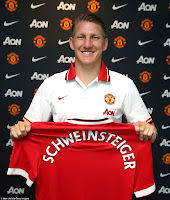 Even though he is in his early thirties, his experience will be invaluable and together with Michael Carrick they have already started the season by interchanging with each other to ensure that the midfield has at least one of them to count on.

Probably not yet fully match fit Schweinsteiger will only improve as the season goes on. Something else that the German will undoubtedly bring to the team is a level head for when the youngsters are losing theirs similar to a certain Cantona back in the nineties.

United fans had to wait a further two weeks until news of yet a new arrival, but in that time every player who could kick, head and catch a ball were inevitably linked to the team these included such names as Lloris, Kane, Zlatan, Bale, Ronaldo, Hummels, Gaitan, Pedro, Otamendi, Cavani, Pele, Best, Law and Charlton ..you get the idea. But it was a goalkeeper who would be the next to sign on the dotted line.

With speculation building about the departure of David De Gea to Real Madrid and the fallout between Victor Valdes and the manager it wasn’t really a surprise to see Sergio Romero given his chance at becoming United’s new number one as he was another player to have worked with van Gaal during their time at AZ in Holland. 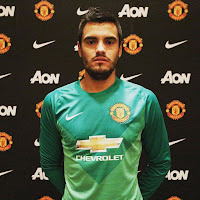 The Argentinian keeper came from Sampdoria with an impressive international CV after being the first choice goalkeeper for his national squad at the 2014 World Cup, where Argentina reached the final after Romero’s heroics in the semi’s only to lose out to Germany.

As van Gaal wasn’t willing to choose De Gea, because his head wasn’t on straight with all the gossip, Romero seized his chance with literally both hands and has started all of United’s fixtures this season, keeping four clean sheets along the way. The only slip up so far was against Swansea where he was responsible for allowing a shot at his near post to creep inside.

With the window now closed it turns out that with the collapse of De Gea’s deal to Madrid and Valdes not being able to find a new club the team now has a trio of world class keepers who will all be vying to be the first choice between the sticks.

One keeper who will not be around is Anders Lindegaard who has joined West Bromwich Albion on a free transfer. Jonny Evans also joined the United exodus to WBA following in the footsteps of Darren Fletcher who moved there last January.

The transfer rumours continued right up until the final day with news circling that at least three more big-name players would be added to the squad, but it turned out to be only one and that was another surprise in the form of 19-year-old French striker from Monaco Anthony Martial, who at £36m has become the most expensive teenager in football. 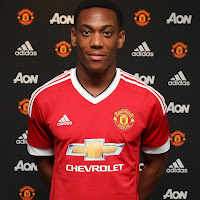 The French starlet has made 70 appearances for AS Monaco since 2013 and has scored 15 goals. The forward has represented his country from Under-16 level right through to Under-21’s and was called up to the French senior squad for the first time in August by Didier Deschamps, who is obviously impressed with the youngster.

United wasted no time in announcing that Martial would take over the number 9 shirt that was vacated by the departure of Radamel Falcao who ended his loan spell at United and ended up moving south to Chelsea.

There were other forwards who left Old Trafford, including Javier Hernandez, who signed for Bayer Leverkusen, Nani joined Turkish outfit Fenerbahce but it was the sale of Robin van Persie that perplexed some fans. The Dutch striker was offloaded apparently after falling out with his compatriot van Gaal for a fee that was far too cheap for a player of his qualities.

This has left United light on forwards and with the side competing on four fronts this season it will become an issue if injuries are sustained to Rooney, Martial or James Wilson. Van Gaal has gone on record saying that he will utilise Fellaini in attack as a number 9 or 10, however, that is not the answer and one more signing of a striker would have eased the worry. The same could be said about the defence where an experienced center back was sorely needed even with the imminent return of Marcos Rojo.

The exit door also saw loan deals for two promising first team youngsters Adnan Januzaj and Tyler Blackett. Januzaj has a great chance to develop at Borussia Dortmund and a year at Celtic will do Blackett the world of good.

There you have it, another end to an interesting transfer window with some surprise buys and United having been linked to literally hundreds of players. For those of you who enjoy the gossip, rumours and speculation don’t worry It will all happen again next January, but for now it’s time to settle down and enjoy the football.

Thanks as always for reading.