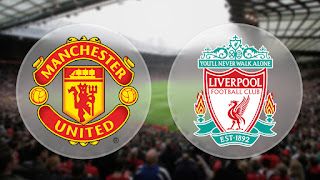 It is every young, and old, United fan’s dream to score at the Stretford End on your debut against the club’s most bitter rivals Liverpool. Well it became a reality for teenage sensation Anthony Martial as his first goal for his new team put the result beyond the reach of Liverpool, immediately giving him hero status among the Old Trafford faithful.

At the end of the latest round of internationals, it was a much-welcomed return to the Premier League and what a return as the two biggest rivals in English football locked horns again at Old Trafford.

All the international talk prior to the match was the achievement of United’s captain Wayne Rooney as he surpassed Sir Bobby Charlton’s England scoring record by netting his 50th goal from the penalty spot against Switzerland and now has his sights set on the scoring record at club level.  However he will have to wait a little longer as he was ruled out with a hamstring problem.

On the eve of the game United were boosted by the news that keeper David De Gea had put pen to paper and signed a new four-year contract with the option of an extension. There was, however, no news about whether or not a clause had been added that Ed Woodward could tell Real Madrid where to go if they returned for their main transfer target. At least if the Spaniards do come calling again in the future they will have to pay for the privilege of taking our number one.

Louis van Gaal had a big decision to make with the absence of his captain Rooney in who would he choose to lead the line up front.  Would it be Fellaini, or the newest arrival at Old Trafford French starlet Anthony Martial?

On the bench were: Romero, McNair, Rojo, Schneiderlin, Valencia, Young and Martial.

An interesting selection with the experienced duo of Carrick and Schweinsteiger starting in the midfield together, with Fellaini chosen to lead the attack which meant that new signing Martial would start his United career on the bench.

The United defence would have their hands full with Rodgers choosing a double strike force of Benteke and Ings to test Blind and Smalling.

The choice of Michael Oliver as match referee didn’t exactly fill the Old Trafford faithful with confidence as his record in United’s matches is poor to say the least.  Who can forget the red card he issued to Di Maria last season for the player touching him?  But Joe Hart got away with a headbutt against the same official.

United started the match on the front foot and looked up for the challenge from the off with the ‘old timers’ Carrick and Schweinsteiger controlling the middle of the park. A huge roar greeted De Gea first touch of the ball followed by a chorus of his name echoing around the ground.

A mistake by the Liverpool keeper Mignolet led to the first real chance for Fellaini but his attempted lob over the retreating keeper was not on target. 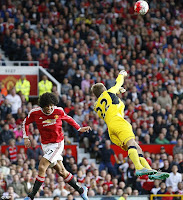 The away keeper was kept busy during the first ten minutes as Memphis tried his luck on a couple of occasions. The Dutch winger showed great pace down the left and gave the defence the jitters so much so that they resorted to fouling him.

On the right-hand side, it was player of last month, Darmian who was stretching his legs to good effect as he played a wonderful ball into the feet of Fellaini but the Belgium looked at bit rusty as he failed to react quickly enough to get a shot away. This season the Italian full back is showing exactly why he was the right buy over Liverpool’s Clyne.

After the first 30 minutes, it had been all United with the visitors not being able to trouble David De Gea in goal or for that matter the defence as all the play was at the other end. United did have a let off when Benteke was ruled offside when one on one with De Gea.

The match lost its way towards the end of the half as United seemed to run out of ideas as to how to break through the visitors defence with a lot of nice passing from the likes of Herrera and Mata with no end result.

Not a thrilling half by any means, but one that was governed by United’s superior midfield and with chances that they should have done better with especially Fellaini who showed poor control in the box. Liverpool looked decidedly disjointed especially in the midfield as they let the home side dictate the pace and were probably happy to go in at half-time all square. One thing was for sure Louis van Gaal didn’t appear at all happy.

The United manager decided to make a change at the beginning of the second half by bringing Ashley Young into play in place of Memphis Depay. It was Young who provided many of Fellaini’s goals last season with his deliveries on a plate for the Belgian.

What a substitution it was as straight from the off Young created havoc in the Liverpool defence and was brought down on the edge of the box and from the resulting free-kick Mata played the ball to a waiting Daley Blind who smacked a brilliant shot into the top corner from the edge of the area. 1-0 to United and full credit to Young, who looked up for the challenge.

A great start to the half for the home side and they seemed invigorated by the goal and pressed hard for the second.

After ten minutes, David De Gea was clearly bored as he tried to help the visitors out with some erratic passing, but redeemed himself with a fingertip save from Ings. David is most certainly back.

Fellaini finally began to put himself about more and was brought down for a free-kick in a great position for United which Young flashed just over the bar.

Once again Matteo was the star on the right as he continued to press forward and seemed capable of creating chances with every foray forward.

There was a heart in mouth moment for the home fans as Blind proved his worth at the other end with a heroic defensive clearance off the line to save United’s skin.

The 66th minute should be remembered as it was the moment French teenage sensation Anthony Martial made his United debut as he replaced Mata. In doing so, he became the first Man Utd player to make his debut v Liverpool at Old Trafford since John Thompson way back in 1936.

Then in the 69th minute Herrera was scythed down inside the box and the referee rightly pointed to the spot and it was Herrera himself, who got up, dusted himself down and dispatched the penalty firmly into the net. A goal created and finished by the impressive Spaniard who could have made a claim to become the new spot kick king.

Carrick was replaced by Schneiderlin which meant that Chris Smalling took over the captain’s duties for the final twenty minutes of the match.

On a slightly negative note full-back, Darmian, blotted another impressive game with yet another yellow card, something that he has to keep an eye on as it is becoming a regular event.

There was still time left in the game for David De Gea to remind the football world why he is regarded by van Gaal as one of the best keepers around as he pulled off a wonderful save at full stretch to prevent an effort from Ibe. However, he could do nothing about the goal from Benteke in the last five minutes as the striker pulled one back with a bicycle kick reminiscent of Rooney’s brilliant strike against Man City back in 2011.

Then it was the turn of Martial to take centre stage at the Theatre of Dreams with a debut goal of supreme class in the 86th minute as he collected the ball outside the box and went on a confident run, which ended when he slid the ball meticulously past Mignolet to make it a magnificent start to his Old Trafford career.

The goal earned his new side a 3-1 victory along with the three points, but more importantly a deserved victory over a very disappointing Liverpool who were tepid to say the least in their approach to the game.

The match certainly changed in momentum with the introduction of Young at the beginning of the second half as his non-stop display down the left gave United the impetus to grab the game by the scruff of the neck and turn their possession into goals; earning him a good shout for man of the match ahead of Herrera and Darmian, however Daley Blind deserved the nod above them all for his all round defensive performance and of course the opening goal.

The sweet win moves United up into second place level on points with Arsenal but five points behind local rivals City who had to rely on a last gasp winner away at Crystal Palace.

Let’s hope that the positive mood is taken into the next challenge as United return to the group stages of the Champions League where they will face a tricky match away at PSV in Holland and a game that will see the return of Memphis to try and get one over his previous club.