Sometimes events on the pitch far outweigh the result and this was true about United’s opening defeat in Holland as defender Luke Shaw suffered a double fracture of his right leg which will rule him out for six months if not longer.

After a season of watching from a distance it was time for United to take their place among the European elite once again as they played their opening match in this season’s group stage of the Champions League against PSV of Holland.

The match saw the quick return of Memphis to his old stomping ground after signing for United in June.  He left the club a hero and received a warm welcome from the home fans in recognition of the service he gave to the Dutch outfit over eight years.

Louis van Gaal was also returning to his native homeland, but his record at the Philips Stadion is not a glowing one as a manager as out of ten matches in charge with AZ,  Ajax and Barcelona he has only enjoyed two wins.

After the victory over Liverpool the manager had a tough decision to make and that was whether he should start with the side that began against Liverpool or go with the eleven that finished the match because the first half was not a patch on the second.

Ashley Young brought a much-needed injection of urgency to the second half at Old Trafford last Saturday and, of course, there was a scoring debut for new teenage striker Anthony Martial.

A very attack-minded side with Martial given his first start as a United player after van Gaal admitted that Fellaini was too ill to start the match and with no Rooney he was left with little choice. Chris Smalling was given the captain’s armband as Carrick started from the bench.

Man United got the match underway wearing their new black third strip for the first time and the first quarter of an hour was all United as they used the wings to great effect and dominated possession and would have been hoping to turn it into goals until a horrendous tackle on Luke Shaw by defender Hector Moreno changed everything.

As Shaw entered the penalty area after a surging run he was scythed down by Moreno and went to ground in obvious agony as clearly something serious had happened. After receiving medical assistance, Shaw was stretchered off clearly in pain with an oxygen mask easing his obvious discomfort.

The amazing thing was that Moreno wasn’t even cautioned for his awful challenge and quite why the referee didn’t even deem it dangerous in any way is beyond belief.

On a side note of the sad turn of events, as Shaw was stretchered off to warm applause throughout the stadium Marcos Rojo entered the action as he replaced the England international for his first start of the season.

The United players were visibly upset by the injury to their teammate, but they had to find a way to clear their minds and get on with the job in hand.

United stepped up the pressure five minutes before half-time and it paid off as Memphis collected a great pass in the 41st minute from Blind, who had moved to the left back position, and the former PSV hero danced into the penalty area then placed a low left-footed shot past the keeper to give the visitors a deserved lead.

The Dutchman almost followed that up with his second before captain Smalling found himself in the unlikely position of a striker, however, his effort was blocked for a corner. A case of captain literally leading from the front. 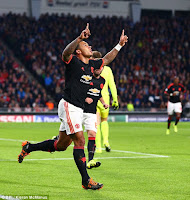 With so much added time to be played due to the injury to Shaw PSV rubbed salt into United’s wounds by equalising from a corner and it was the player who shouldn’t even have been on the pitch, Moreno, who had his header deflected into the net by Blind.

Even with the two late goals the first half was all about the terrible injury to Luke Shaw and it was made worse by the fact that the offender Moreno celebrated his goal with such aplomb. Shaw had started the season extremely well after so many injuries last season, so this was a real blow to the youngster.

The second half got underway with the home side on the offensive and their attacking play caught United on the back foot after 57 minutes when a high cross into the box eluded Rojo and found Narsingh at the far post to head home to put PSV in the lead.

Interestingly, it was Blind who had struggled to get back to track the scorer in the position where Shaw would have been. Blind has been solid at the back alongside Smalling but as a full-back his pace is suspect to say the least which begs the question why wasn’t Rojo used as a direct replacement for Shaw to keep the partnership of Smalling and Blind together.

Moreno was at it again, this time on Young, who was brought down by another dangerous tackle, but this time he was eventually booked.

Mata had a great chance to equalise or even square the ball across the box to an unmarked Memphis, but his initial control let him down and the big chance was wasted.

During the second half there was a lot of huffing and puffing by United but without the ability to blow the home defence down as they tried to play their way through the middle of a compact back four and when they did go wide the deliveries from the wings were poor.

Van Gaal tried to freshen the side up when he replaced Herrera with Fellaini for the last twenty minutes and shortly after the change Martial almost recreated the Mark Hughes goal from the ’91 Cup Winners Cup final but the teenager shot weakly wide.

Valencia replaced Young in the last throws of a match that was increasingly slipping away from United with the home supporters raising the roof as the away side struggled to create any chances of note with Fellaini guilty of slow reactions inside the box probably due to his illness.

There was a moment that summed up United’s night when in injury time they won a free-kick on the edge of the box for a handball and with the penalty area full of players ready to attack the expected delivery they decided to play it short and the chance had gone.

Full time and United had been beaten 2-1 by a determined and well-organised PSV side. As for United they can take solace in the fact that things can only get better.

The injury to Shaw left a black cloud over the match and the performance of the referee should also be questioned as he let so many bad challenges by the home team go without any cautions, but the Red Devils only had themselves to blame as once they had taken the lead they should have made sure of the result with enough chances to put the game out of the reach of the hosts, but they allowed the Dutch side to bully them into submission and were left wanting in the end. 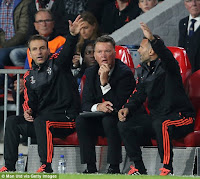 There is still no need to panic just yet as there is a long way to go in the group and if United can win their first home game against Wolfsburg then they will be firmly back on track.

But it was a night when everybody’s thoughts in the football world turned to Luke Shaw and with the well-wishing came the hope that he will make a full and speedy recovery as did Antonio Valencia when he suffered a bad break to his ankle, also in the Champions League.

I will leave the last words to Shaw himself: “Thank you, everyone, for your messages, words can’t describe how gutted I am, my road to recovery starts now, I will come back stronger.”