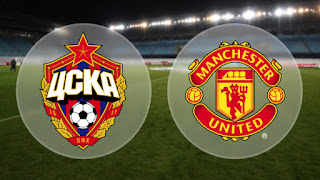 United returned to the city of their famous 2008 Champions League triumph looking to obtain a first away win in their group this season. However, all they managed to come away with was a point following a below par performance.

When the draw was made for this season’s Champions League group stages many fans worried about facing CSKA for no other reason than it would involve a long round trip to the Russian capital for the squad, especially considering that on their return to Manchester they would have the small matter of a local derby to look forward to a few days later.

Buoyed by a brilliant display away at Everton the squad looked to be on a high in the build up to the match against the twelve-time Russian champions who like United and the other teams in the group were all locked on 3 points prior to this match.

Louis van Gaal had a small quandary and that was whether or not to stick with the side that performed so well at Goodison Park with fit again Herrera and Rojo the standout performers or recall the players who hadn’t featured including Memphis, Blind and Valencia. In the end the manager decided to freshen things up by choosing a starting XI which included: De Gea, Valencia, Smalling, Jones, Rojo, Schneiderlin, Schweinsteiger, Herrera, Lingard, Martial and Rooney.

On the bench were: Romero, Fellaini, Mata, Carrick, Blind, Memphis and Darmian.

So, a surprising start for youngster Jesse Lingard, who got the nod ahead of Juan Mata on the night and a recall for Valencia in place of Darmian. It was Valencia who scored the winner in this same fixture six years ago to the day.

Mata must have done something to irk the manager as he was pulled off against Everton at half-time and overlooked tonight, even though van Gaal stated it was due to the Spaniard needing a little rest, also the Dutch duo of Memphis and Blind had to start from the bench after being overlooked for the second straight match.

United got the tie underway on a bitterly cold night in Moscow and had an early shout for a penalty as Martial looked to have been brought down inside the area, but nothing was awarded, then in the 15th minute Martial was involved in another penalty debate as when CSKA attacked the United area the ball hit the French youngster on his raised hand and the referee had no choice but to award the home side a spot kick. Martial’s name was taken by the referee for the offence.

De Gea saved Eremenko’s resulting penalty, but it was Doumbia who reacted quicker than the United defence, especially Phil Jones, to poke the rebound home and put the Russians ahead. That was probably Martial’s first mistake in his fledgling United career, but one that hopefully he will learn from.

Following the penalty, the play became a little scrappy with some heavy challenges going in with United taking their time to get into any sort of rhythm. On the half hour, David De Gea pulled off a fantastic one-handed save at full stretch to prevent the ball entering the top corner from an audacious attempt from Musa. 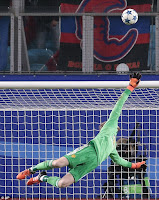 At this point, United were toothless in attack and the tactic of Martial wide left was just not paying off and his pace and skill on the ball would have been better suited through the middle. Martial did manage to deliver a great cross with the outside of his boot, but both Herrera and Rooney got in each others way trying to get on the end of it.

At half-time, United went in trailing to the penalty and if not for De Gea it could have been worse. This was a poor showing by the away side who had around 70% of the possession during the opening 45 minutes, but had absolutely nothing to show for it and would be hoping that the situation could be rectified in the second half. 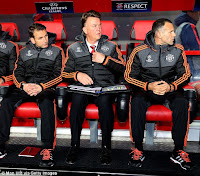 Van Gaal decided that a change was needed at the start of the second half and brought on Fellaini in place of Schweinsteiger. In the opening ten minutes, it was a similar situation to the first as United had the majority of the ball, but this was the tepid display of the Emirates and not the Goodison Park showing.

There was absolutely no cohesion with the players in attack and it wasn’t until the hour mark that the visitors managed an effort on goal when Rooney had a near post effort saved. Lingard then tried his luck, however, his perfectly timed run was wrongly adjudged to be offside.

The second change saw Blind enter the fray when he replaced Rojo and straight after the change United pulled level through Martial. The French striker made amends for giving away the penalty by producing a stunning header inside the penalty area following an excellent cross from Valencia.

Martial showed great character to pull himself up after the error of the first half and it is credit to him that he didn’t buckle like many young players would have. The way he judged the flight of the ball to run unmarked into the box was a delight to watch.

Not for the first time this season United looked a different side from the first half and began to push forward for the winner as Memphis became the last substitution when he came on for the hard-working Lingard to see out the last ten minutes of the match.

Fellaini had a late chance to grab all three points following good work from Memphis whose deep inswinging cross was flicked back into the danger area by Martial, unfortunately Fellaini couldn’t add the finishing touch that was desperately needed. Fellaini was then needlessly cautioned for giving away a free-kick after a dithering Jones failed to support the Belgian, poor play by Jones who dropped his colleague in trouble.

The game ended in a 1-1 draw which overall United will have to be content with after a terrible first half performance with once again many players under performing none more so than the captain Wayne Rooney, who not for the first time this season has done nothing to prove his doubters wrong. He display seemed lethargic and his passing was nowhere near good enough at this level.

How long will it be before van Gaal bites the bullet and leaves his skipper out. In the second half, Martial once again proved that he deserves the chance to play in the central strikers role.

At the back Jones produced his usual unconvincing display and he doesn’t exactly fill his colleagues with confidence and the best fit would be either Blind or Rojo playing alongside Smalling with the other filling in at left back.

With a possible banana skin of a match out of the way United can now head back to England and concentrate fully on the 170th derby against City on Sunday, a match that will not only decide which team will have the bragging rights around the city but will also determine which side gains the upper hand in the league.