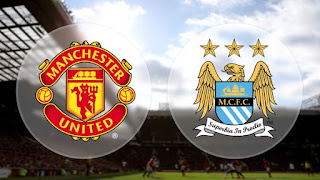 The 170th Manchester derby will go down as a dull one sided affair in which at least United tried to show the passion and commitment needed in such a match but lacked one all important factor, goals.

After the worry of how United would cope with a long round trip to the Russian capital to play CSKA Moscow, the home side responded with a display that dispelled any concerns as they outran, outplayed and outfought their noisy neighbours with a display that only needed someone to put the ball into the back of the net.

Louis van Gaal got his team selection and tactics spot on as he picked a starting eleven that nullified the opposition. It was composed of De Gea; Valencia, Jones, Smalling, Rojo; Schweinsteiger, Schneiderlin, Herrera; Mata, Rooney and Martial.

The only change from the midweek saw Mata return to the team instead of Lingard which meant still no place in the starting line-up for Memphis and Blind. Rooney was once again chosen even-though his form has been questionable lately. The question on people’s minds was which Rooney would turn up?

The Reds got the match underway attacking the Stretford End with Old Trafford, as you would expect, buzzing with the anticipation of a classic encounter.

Valencia started the game by stretching his legs down the right wing but his final deliveries failed to pick out his forwards. It was an enthusiastic start by the home side as they tried to build up attacks utilising both flanks and had an early shout for a penalty after a suspicion of handball inside the box.

The fast tempo of the opening minutes suited United more and seemed to unsettle City but could the home side keep the pace up as they had not started a first half in this vein for most of the season.

Martial’s dribbling skills on the left gave the City defence trouble and Fernandinho became the first player to be cautioned after upending the young striker, although the City player should have been booked earlier for an offence that was much worse. It just goes to prove that there has been no consistency in the refereeing of matches this season.

Rooney received a belated 30th birthday present when he was clouted on the head by city captain Kompany and had to leave the pitch to have his scalp stapled to stem the flow of blood.

City still continued to struggle with the running of Martial and on one such foray forward, he played in Mata but the usually cool Spaniard dithered on the ball and the chance was gone.

This was turning out to be a true derby match in the fact that both sets of players were not holding back with their challenges and all showed 100% commitment in the tackle.

The threat of Prince Harry lookalike De Bruyne had been kept firmly in check by the superb defending of Rojo whenever the Belgian ventured into the Argentine’s area of defence.

Phil Jones was up to his usual indecisive self by inexplicable heading the ball out for a corner when there was absolutely no danger whatsoever. Rooney then followed that up with a wayward 30-yard pass to nobody. At least Rooney had an excuse having had a bang to the head, Jones on the other hand had no such excuse. 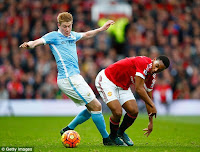 Mata played himself in trouble and went into the referee’s book after his challenge to try and retrieve the situation after he had given the ball away in a dangerous area, thankfully for him the resulting free-kick came to nothing.

Kompany was the latest player to be bamboozled by Martial’s pace as he unceremoniously brought the French forward down to earn a booking.

At half-time even though the scores were level United had to have been the happier of the two sides after one of their best displays in a first half this season. Despite not having a clear chance on goal they had started brightly and kept the visitors at bay. The only negative had to be the standard of delivery from free-kicks that let United down and without Memphis in the side, it was left to either Mata or Rooney to deliver or in most cases not.

Neither manager made any changes at the beginning of the second-half as United tried to build on their excellent amount of possession of the first half.

Martial and Schweinsteiger combined well down the left to set up a chance for Mata in the box, but the ball was eventually cleared for a corner which provided United with their closest chance of the game up to that point. The ball sailed over everyone and Smalling, who was loitering unmarked at the far post, placed a header back across goal which just crept past the far post. Unlucky by Smalling.

Sterling was taken off by City after only five minutes of the restart following an unconvincing display and at this point in the match United enjoyed 70% of the play but desperately needed to turn it to their advantage with a goal.

Mata was almost played through by Rojo, but Hart was quick to react and cleared before Mata could get to the ball. A lucky escape for the visitors as United continued to press for the opener and City had not offered anything in the way of an attack during the second period.

Van Gaal had seen enough and decided that a change was needed and replaced a disappointed looking Mata with Jesse Lingard for the final twenty minutes to clearly add pace to the attack as the visitors looked there for the taking.

The change almost paid off immediately as Lingard bore down at pace towards the City area and played a nice ball wide to Rooney, whose attempted cross was easily blocked by the away defence.

Fellaini entered the match for the last fifteen minutes in place of Schweinsteiger and didn’t seem to have a set position on the field which was obviously meant to confuse the blues, however, it also seemed to confuse the reds as at the same time it coincided with City’s best spell of possession in the game.

Valencia was forced to leave the match with a knock to his leg and Darmian became the final substitution of the match for United in the 80th minute.

Magical Martial produced the pass of the match when he played a delightfully flighted ball over the top for Lingard to run onto and the youngster tried an athletic flick towards goal which rebounded off the crossbar. A great ball from Martial and almost a heroes ending for Lingard.

That chance was quickly followed by a close range effort from Smalling that was saved, it has to be said brilliantly, by Joe Hart way down at his near post.

The game finished in end to end play, however, neither side could break the deadlock and the match ended all square at 0-0 in what has to be said was so one sided that United will be angry that they couldn’t capatlise on their efforts. City will leave Old Trafford happy in the knowledge they came away with a point after such a tepid display having not troubled David De Gea in the United goal.

The man of the match can only be between two players and they are Martial and Rojo. Martial once again displayed his value to the team whenever he had the ball at his feet and it was his close control at full pace that caused the City defence all sorts of problems. Rojo had De Bruyne completely in his pocket throughout the 90 minutes. The trio of Smalling, Schneiderlin and Schweinsteiger all played at the top of their games, but it has to be Martial who takes the plaudits again.

Once again, it was another disappointing display by Rooney and you do have to wonder how long van Gaal will continue to pick his captain just because he is the captain. With no shots on target and only a 55% pass accuracy enough has to be enough. Pace is the crucial element to United’s attack and Rooney’s has waned of late. The upcoming match against Middlesbrough in the league cup could be an ideal opportunity to unleash a forward line comprising of Martial, Memphis, Pereira and Lingard to see what is possible with the youngsters.