United Pay the Penalty Against Boro 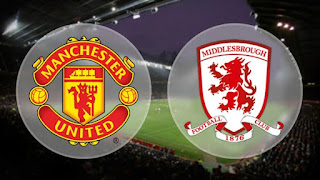 United were dumped out of the Capital One Cup after a performance that proved one thing and that is they are a side devoid of ideas and restricted by tactics that are clearly not working.

United took a break from the pressure of the Premier and Champions Leagues to concentrate on the Capital One cup and the visit of Middlesbrough to Old Trafford.

The last time these two sides met in the competition was back in the 2008-09 season when United triumphed with a 3-1 victory in the 3rd round on their way to lifting the trophy at Wembley.

It is well known that the top flight sides tend to utilise their squads in the League Cup by giving a chance to some of their youngsters and in the last tie, it was one of those fringe players that turned out to be the hero, Andreas Pereira.

So, it was no surprise to see that Louis van Gaal once again went down the same route of choosing a side that mixed things up a little: Romero, Darmian, Smalling, Blind, Rojo, Carrick, Fellaini, Pereira, Lingard, Wilson and Memphis.

In total there were nine changes from the derby draw and the side boasted a young forward line that had both pace and ability in large amounts with Memphis, Wilson, Pereira and Lingard set to torment the Boro defence.

As expected United started the more confident of the two sides by passing the ball around neatly, but as the half progressed the home side made little inroads into the visitors defence and for all their quality on show they failed to hit top gear.

Fellaini was the busiest of the United players linking the midfield with the attack, but it wasn’t until the 34th minute that the home side had their first shot on goal and that was a very tame effort by Wilson that the visiting keeper had only to bend down and collect.

This was not the start that United was hoping for as they made it more difficult for themselves by allowing Boro to see too much of the ball and it nearly paid off for the Championship side when Downing tried his luck from the edge of the box with a dipping effort which Romero did well to tip over for a corner. That had to be a wake-up call for United that Boro were not here just to make up the numbers.

Half time and it was all square at 0-0 with the visitors coming the closest to breaking the deadlock and a lackluster United unable to get into any groove.

After being given a chance by the manager it was unfortunate that the youngsters hadn’t shown their true class by failing to get behind the Boro defence and in the second half you wondered how long it would be until van Gaal freshened things up from the quality bench available to him.

The first of those changes came at the start of the second half when captain Rooney replaced Wilson in attack, but it was Middlesbrough who started the half on the front foot as they clearly believed that the match was there for the taking.

Memphis had a shot on goal which was almost fumbled by Mejias in goal but, to be honest, he made the Dutchman’s shot look better than it was.

After ten minutes of the half, United finally started to take control of the game and began to pepper the visitors goal with speculative shots the closest from Felling and Pereira.

It was hearts in mouths time when just before the hour mark Boro thought they had scored when Daley Blind lashed the ball into his own net, thankfully for him and the fans, Boro were adjudged to be offside in the build-up to the blunder.

This was turning out to be embarrassing for the Red Devils and it was summed up by Memphis as he totally miss-hit a shot after dribbling into the area to set himself up for a chance.

Young made a welcome return to the side after an injury layoff when he replaced Rojo for the final half hour of play.

For a neutral this was an exciting cup tie, but for United it was a nervy display as once again Blind almost managed to score at the wrong end as Romero let his back pass squirm under his foot and both looked relieved as the ball went just wide.

The last spin of the dice for van Gaal came when he let loose his French star Martial who entered the fray for the hugely disappointing Memphis in the 70th minute and the change almost had the desired effect as Martial went on one of his trademark runs only to be thwarted by the defence.

Fellaini had a wild shot at goal as United’s play became more desperate entering the last ten minutes of the game. A calm head was needed up front while all around were panicking.

With extra time looming you wondered where, if at all, a United goal was going to come from as they laboured in front of a happy 10,000 visiting away support. 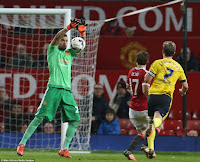 Lingard rattled the post in the final minute followed by an effort at the other end from Leadbitter as he tried to lob Romero but the keeper made amends for his earlier mistake by saving well then he dived low to prevent a certain goal from a Downing strike.

There was more action in the last three minutes of normal time than in the whole of the match with Romero being the busiest of the keepers making at least three stops to deny Boro a shock ending.

The first period of extra time saw the home side go for the jugular from the off, but as has been the story on numerous occasions this season the final ball let them down and they soon allowed the opposition to get back into the game.

The home side were reduced to crosses aimed at Fellaini that Boro dealt with far too easily and once again Rooney’s touch was terrible to watch as he and Fellaini failed to impress as they struggled to find a way through.

Into the second period of extra time and to avoid penalties United would have to produce something they hadn’t managed all match and that would be a moment of brilliance. It was almost produced by the excellent Martial who had a dribble into the area, but was out crowded by at least four defenders before he could deliver the final strike.

Pereira had another chance to become the hero again when he had a thunderous strike that sneaked past the post. there was a late shout for a penalty for United as a cross definitely hit a defenders hand but the referee, Lee Mason, waved play on.

Fellaini almost won it at the death with two headed chances either side of a Martial header which was a hair width wide.

End of extra time and all square as the match headed into penalties.

The penalty shootout ended in a 3-1 victory to Middlesbrough after captain Rooney, vice-captain Carrick then Young all fluffed their lines from the spot and with it ended the first chance of silverware this season.

In all honesty, if United’s style of play has been reduced to hoofing the ball into the box aiming for Fellaini’s head and hoping for a chance to fall at the feet of one of his teammates then there needs to be a serious overhaul of United’s tactics.

All credit has to go to the visiting team for wanting the win more than the hosts, but this has to go down as an embarrassment for United who have clearly not learned from their recent failings and continue to be unable to kill teams off.

Something is clearly not working when we can’t even put on a winning performance against a team from the lower leagues with a fairly strong looking side. How long do the fans have to put up with displays of pure inadequacies from players who have always enjoyed the backing of the fans? It’s the youngsters who will suffer from this defeat when it should be the experienced players who have to come in for the most criticism along with the coaches.

People will say it’s only the League Cup, however, that is not the point the point is United are expected to win everything they play for and if they can’t then at least go out with a bang trying and not a whimper.