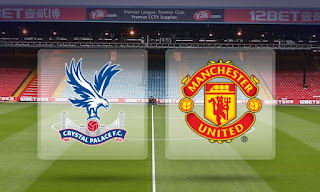 ‘Sticks and stones may break my bones, but names will never hurt me’ was the reply from Louis van Gaal to the criticism of his tactics by United legend Paul Scholes after the bitter disappointment of the defeat by Middlesbrough in midweek.

Following their recent goalless outings there has been backlash from all quarters, not only Scholes, questioning the lack of inventiveness in front of goal by United so here was a great chance for them to prove their critics wrong and show that the recent results were only a blip in their season by putting the frighteners on Palace. Unfortunately, it was the same old story yet again at Selhurst Park.

In the League Cup defeat van Gaal gave the youngsters a chance in attack, but it backfired dramatically as they struggled together against the Championship side so he reverted back to a more experienced lineup hoping that the goals would come.

Without Memphis in the side due to injury, van Gaal kept faith with under performing and under fire captain Rooney, however, Schneiderlin, Schweinsteiger, Mata and Herrera all returned to the side to bolster the team’s attacking options.

There was one surprise on the bench and that was the inclusion of 17-year-old defender Axel Tuanzebe for his first senior squad involvement.

Crystal Palace had the first chance as early as the first minute as United gave the ball away to allow Gayle a chance to test De Gea’s reflexes. There was more sloppy defending from the visitors when they gave Palace hope in attack, not a good start from United who looked nervy all over the pitch in the opening ten minutes of the game.

Not for the first time this season United was a side in complete disarray as Palace threatened to open the scoring and if it wasn’t for the brilliance of De Gea and the woodwork then the Red Devils would have been in real trouble within the first fifteen minutes.

A scary start at Halloween for United.

United needed a calming influence on the pitch to instil confidence in the side and to nullify the threat and pace of Palace. One thing was certain the fantastic away support was in fine voice as always.

Mata won a dubious free kick on the edge of the area which he left for Rooney to take, but his effort was poor and lacked the pace to beat Hennessey in goal. However, United were beginning to control the game without threatening Palace too much.

Rooney’s poor season was summed up as he failed to latch onto a great weighted through ball from Martial on the half hour. A chance that he would have buried in his prime, but it seems those days are well behind him as his play has lost the edge that made him so threatening.

Herrera had the last chance of the half after Mata and Martial carved out an opportunity for the visitors, but he totally lost his footing at the vital moment inside the penalty area.

Half time and all was square thanks mainly to De Gea’s excellent save and no thanks to Rooney’s indecision up front. Surely at some point in the second half we would see Rooney replaced by Young allowing Martial to take up the central strikers role, however, as we witnessed later the manager had other ideas.

The second half started with no changes made by van Gaal. Both sides didn’t hold back in the challenges as both Smalling and Darmian picked up cautions. The Italian’s booking means that he will automatically miss United’s next Premier League encounter with West Brom and would shortly force the manager’s hand into a change. 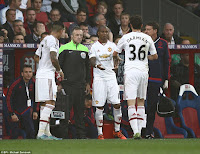 After a period of play in which the away side created absolutely no chances van Gaal decided to make his first change of the game in the 66th minute when Young replaced Darmian most likely to prevent the defender receiving a second booking as he had struggled with Zaha all day.

This was immediately followed by Fellaini’s inclusion at the expense of Schweinsteiger. Could the lofty Belgian produce the winner as he had done last season. Herrera blotted his copybook in the 70th minute with a dive in the penalty area in which he was fortunate not to receive a yellow card.

At this point in the match, it was the home side who seemed the likelier of the two teams to grab the all-important opener as United struggled to get into any rhythm and it was that man again De Gea who came to his team’s rescue with some fine blocks to prevent Palace.

Van Gaal’s last throw of the dice saw Lingard replace Mata for the final fifteen minutes of the match. Any number of players could have been dragged off as none of the team, with the exception of Smalling and De Gea, performed anywhere near the acceptable level for a United player.

Two late chances for both sides could have sneaked the win the latter almost falling for Rooney after good approach work from Young.

The match ended with a point shared for both sides, but in all honesty Palace will feel aggrieved they didn’t collect all three after they had created the majority of the chances compared to United who failed once again to put on a display worthy of their great name. They looked like a side devoid of any creativity or drive, and were lucky to come out of the game with a point.

Last season’s problems stemmed from the defence, however, the main problem with this campaign is the toothless attack of United. Sure, we have the quality there, especially with Martial, but he can’t do it all alone and the demand for another striker must be paramount in the manager’s mind. This was the third game on the bounce that United had failed to find the net from open play, a statistic that is just not good enough.

If only the striker problem had been addressed in the summer as all knew that entering into a new season without four recognized strikers was going to stretch the side to the limit. Add to that the poor form of Rooney and it makes the situation worse, even more so when the only fallback plan is to utilise Fellaini as a literal springboard in the hope of something coming from his bushy head.

Van Gaal and his coaches have their work cut out ahead of the upcoming Champions League game with CSKA Moscow and unless they want another competition to end up out of their reach they had better come up with a plan to fix the obvious failings and quickly.