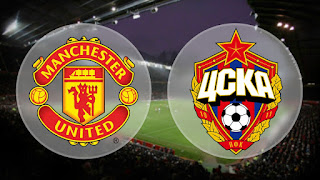 Manchester United’s barren run ended when Rooney got his head on the end of a Lingard cross to finally lift a veil of uncertainty from the Theatre of Dreams.

After being goalless in the last three matches, the pressure was on for United to find the net against their Russian opposition to take a step closer to qualification from their group in the Champions League at Old Trafford.

Much had been said and written about United’s lack of goals and poor inventiveness in attack ahead of this important clash so it was interesting to see the starting XI given the task of righting the wrongs of the last few games: De Gea, Young, Smalling, Blind, Rojo, Carrick, Schweinsteiger, Mata, Lingard, Rooney and Martial.

Jesse Lingard was given yet another opportunity to prove his worth in the side along with Ashley Young at full-back in place of Darmian. Carrick and Schweinsteiger were chosen together in midfield with Rooney once again given the nod in attack even though his form has been poor for the majority of the season.

Subs: Romero, Herrera, Memphis, Fellaini, Jones, Darmian and Pereira. After the disappointment of being dropped from the Holland national team Memphis could only make it onto the bench sat next to Ander Herrera whom many thought would have started the match.

CSKA got the game underway and immediately it was clear that the home side had taken up a more traditional 4-4-2 system with Rooney and Martial in tandem up front with Mata and Lingard occupying the wider roles.

The system almost paid off immediately when Rooney had an early effort with a shot that he failed to really get a hold of and it squirmed wide. However, this was a bright start by United and they had a real look of intent about their play. 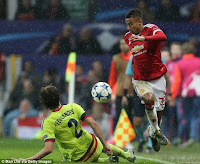 Lingard looked lively in and around the box in the opening ten minutes and he almost won a penalty as the keeper rushed out before the youngster could get on the end of a through ball.

Blind played a delightful ball over the top which Mata almost got his toe on the end of, but the keeper got to the ball first.

It was all United as the first half progressed with some superb passing play, especially down the left channel and only needed a goal to reward their industry.

After half an hour, it was still 0-0. United’s performance was a vast improvement on the recent dull showings with Blind in superb passing form from the back as he was the main outlet for start of the attacks.

Rooney delivered a free-kick into the danger area which only needed the slightest of touches from Smalling, but the defender ducked under the ball clearly believing that it was headed into the far corner.

More great play by the home side provided an excellent opportunity for Lingard, but the forward lashed the ball over the bar. A great chance for the youngster who only needed a little more composure to open the scoring.

Rojo was the next culprit as he leathered the ball just wide from close range from a wonderful pinpoint cross from Young.

Half time and the match somehow was all square at 0-0. The half started on such a high with United set out in a system that promised so much but delivered very little in the end. The half ended a little flat with some erratic passing from Lingard and Rojo, who were both also guilty of missing the game’s two best chances. Having said that CSKA had not even managed one shot on De Gea’s goal, so there was reason to be optimistic for the second half.

There was on bone of contention and that was United’s continued use of the short corner that always ends up with the ball going backwards or worse still possession lost. Get the ball into the box where there is the chance of someone getting their head on the end of it.

The home side kicked off the second half attacking the Stretford End with no changes made to the side. Lingard had an early break down the left wing and delivered a much better cross that was diverted for a corner which was not taken short and was almost headed in by Rojo.

Then it was Rojo’s turn to become the provider as he delivered a decent ball that Martial almost powered in with a header.

Another lively start by United with a flurry of corners, surely it would only be a matter of time before the Red Devils turned possession into goals.

As the hour mark neared CSKA still hadn’t managed a shot on goal, but their new substitute Doumbia showed that he had the pace to be a threat on the counter-attack.

Boos then filled the Theatre of Dreams as Fellaini became the first of van Gaal’s changes as he came on for the popular Martial for the final twenty minutes.

The best chance of the match so far fell to Rooney after great approach play by Lingard then Mata. The Spaniard played the ball on a plate for the captain who somehow managed to get the ball tangled up in his feet close to the goal line. Then Young was fortunate not to be booked after a blatant dive in the area as he looked to earn a penalty.

Memphis livened things up when he came on for Mata in the last fifteen minutes by crossing for Carrick to try his luck from distance, however, he smashed the ball wide.

Then David De Gea showed his class by saving at the feet of Doumbia whose follow-up shot was cleared off the line by Smalling then it was straight up the other end as United broke down the right and got the breakthrough their play had fully deserved when Rooney headed in a superb goal in the 79th minute from a delightful cross by Lingard. In doing so Rooney ended a 404 minute United goal drought to the joy of himself, his teammates, the manager and not least the fans.

At last, United had found a way through to goal that will hopefully provide the springboard for more to come in the future. However, if it were not for the top class intervention by United’s keeper a few seconds before things could have been totally different.

There was a last minute change for United as Herrera replaced the industrious Schweinsteiger. The German received a standing ovation in recognition of his hard work alongside Carrick.

The match ended with the stadium standing in appreciation for their heroes, especially Lingard, who deserves the man of the match accolades purely for his determination and, of course, the assist for the goal.

The end of the long wait for a goal together with the valuable three points meant that United moved to the top of their group and only need one more win from their remaining two games to clinch a qualifying place in the competition’s knock-out stage.

In fairness, the visitors didn’t provide a threat until the introduction of Doumbia in attack and it was the save at his feet by De Gea and the clearance by Smalling that proved pivotal in the last throes of the match.

Let’s hope that United can build on this result and move forward as this was by far their best display of the season. The manager’s decision to use an attacking 4-4-2 formation turned his team into a more threatening side and maybe he should look at keeping the same set up for the foreseeable future.

United have never drawn four goalless matches in a row, so this was a much-needed win for confidence more than anything else.