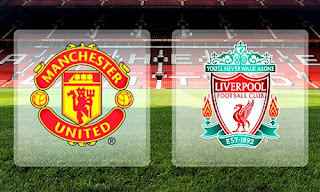 There is nothing worse for a United fan than to witness Liverpool away supporters celebrating getting the better of our team so vociferously inside the Theatre of Dreams as they did following the draw in this second leg Europa League tie.

United’s sole aim was to turn around a two-goal deficit from the first leg in which they only managed one measly shot on target. Even though Liverpool are not a tough side to overcome the bar might have been raised a little too high for a United side who have struggled for goals all season.

It was crucial that the home side came out of the traps in search of the all-important early goal which would not only give a boost to the team but the supporters as well. Van Gaal said after the Anfield defeat that the home supporters got behind their team and that atmosphere made the difference.

This was a strange comment for the manager to make as the volume is always that high for games against the two biggest rivals in English football. But also, the Red Devil fans have been by far the most vocal of all the away fans around the grounds this season and considering they haven’t had much to shout about especially in the dire performance in the first leg that’s saying something.

When the team news was announced the positive feeling one had at being able to turn the tie around slightly evaporated: De Gea, Varela, Blind, Smalling, Rojo, Carrick, Fellaini, Mata, Lingard, Martial and Rashford.

There was no Herrera at all with Fellaini and Carrick included when their recent performances had not exactly gone well. Schneiderlin and Schweinsteiger would both start on the bench.

The first half started with a flurry of chances for United which included a close range header from Lingard that Mignolet saved well, a shot from Mata that he woefully screwed wide when the goal was gaping and a chance for Martial which he blasted over the bar following great approach play from Rashford to set the French youngster up.

Liverpool had had only carved out one clear opportunity in the first half hour and that was a Coutinho drive from outside the area which was marvelously saved by De Gea low down to his left.

Then just after half an hour of play a glimmer of hope for United to get back into the tie as Martial won and converted his own penalty to send Old Trafford into raptures of delight with the belief that United could actually pull it off.

However, the joy and aspirations, as so often has been the case this season, were short lived when on the stroke of half-time United’s right back Varela showed his vulnerability when he was caught out of position by the lively Coutinho who skipped past him as if he wasn’t there and once inside the six-yard area dinked the ball past De Gea and into the net. 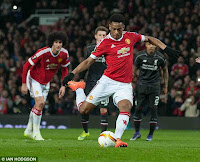 That was the killer blow as it was obvious to everyone watching that the home team were not going to score the four goals needed to win the tie. But it could have been a different story had Rojo put the ball in the net from the closest of finishes a few minutes before Liverpool put the game to bed.

The second half saw a lot of huffing and puffing from the Red Devils without any real openings of note. The stuffing had been knocked out of them following the equaliser and apart from the trio of Martial and Rashford at one end and De Gea at the other, there was no player in red that you thought could offer United a respite in the game.

Fellaini once again flattered to deceive and he clearly hadn’t learnt from the first leg as he elbowed an opposing player on at least two occasions one of which he was booked for.

Van Gaal made his usual mind boggling substitutions when chasing a game and needing goals he ignored winger Memphis and replaced both full backs with full backs and introduced a defensive midfielder. All of which showed a lack off attacking ambition and getting some credibility out of the game by the Dutchman.

With the tie all but over from the start of the half, United went through the motions and looked like they couldn’t wait to get it over with. There was none of the gung-ho spirit that is associated with the club and they exited the competition with a whimper rather than a hurrah! Even with Giggs stood on the touchline to keep balance with Klopp it couldn’t muster the troops. Klopp never even entered the dugout, take a note of that van Gaal.

So, there you have it another chance of silverware has gone and all that is left now realistically is the FA Cup, which you shouldn’t hold your breath for on the team’s present form and there is a small matter of the local derby on Sunday.

Maybe van Gaal should have made his players stay out on the pitch after the match to watch and listen to the away fans rubbing our noses in it. The United fans had to!