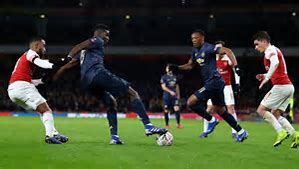 Manchester United travel to The Emirates Stadium today for the Premier League clash against Arsenal FC. The last time the two clubs met was last month in the FA Cup in which Manchester United were victorious winning the game 3-1.

Manchester United are coming off a fantastic victory in Paris mid-week when they won 3-1 in one of the come backs of the season.

Return of Pogba and Martial

Paul Pogba and Martial will return today for the club with the French internationals suspended and injured respectfully.

The game is a massive game for both clubs in the hunt for a top four position. Manchester United and Arsenal are only 1 point apart with 2 goals in difference, the win would be huge for the team with less than 10 games remaining.

Anthony will be available and hopefully we’ll have Nemanja and/or Ander ready as well.
“We’re looking better for it. They just need to have another couple of days training with the team. They’ve done well with their recovery work.

What do you think of the game today, will Manchester United remain unbeaten away from home or will this be the game that Ole suffers his first Premier League defeat as care-taker manager. Either way, what a ride this has been since his arrival.