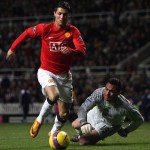 Manchester United are going to kickoff the 2008-2009 season tomorrow at 15:00 GMT when they play Newcastle United at Old Trafford. The theatre of dream is likely to be filled with more than 70000 fans that are looking for the first three points in United campaign to retain the English Premier League for the third season in row.

Manchester United squad is boosted with the news that Wayne Rooney has recovered from the virus he picked up in United African tour while there are still many players who will be unable to play due to injury like: Ronaldo, Park, Saha, Foster and Hargreaves. And Nani who is suspended because of the red card he was given during last season game against West Ham United.

The game against Kevin Keegan side won’t be easy like it was last season when our team won both games with great number of goals. Newcastle has strengthened their squad with players like Guthrie and Gutierrez. Their main threat will come from striker Martins and Irish winger Damien Duff, but as Michael Owen is still suffering with injury, our defenders are strong enough to stop any dangers.

The possible starting line up may be as follow:

Meanwhile, Sir Alex Ferguson stated that everyone will be surprised in next two days as he preparing to end the transfer of a new striker, but he did not say anything that he will be Berbatov who is playing today with spurs against Middlesbrough.

We would like to hear your prediction for tomorrow game.