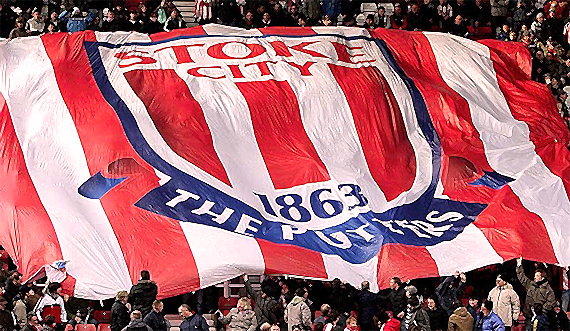 Ahead of the game between Manchester United

and Stoke City on Saturday we at Truly Reds have invited the excellent Stoke City fans website to a session of Questions and Answers. The editor of Lloyd Reddin is providing the answers on behalf of his site and we thank Lloyd Reddin for taking time out from his busy schedule to provide the answers to our questions.

Lloyd Reddin: Unfortunately I couldn’t make it that day, I had other commitments…

TR: Do you believe the average age of your team is too old?

LR: I have no issues with our average age, and believe we have the right mix of youth and experience. Our additions in the summer have helped drop our average age nicely. The likes of N’Zonzi, Adam, Cameron & Kightly are the right side of 30 and have a good future in the game along with our younger players such as Shawcross and Asmir Begovic.

TR: Are you pleased with your early season form so far?

L R: We’ve had a really difficult start to the season but seeing as we’ve played Man City, Liverpool, Arsenal & Chelsea and only picked up one defeat, you have to be happy and optimistic about the season ahead.

T R: What are your thoughts on Manchester United start to the season so far including the Everton and Tottenham Hotspurs results?

L R: You are famous slow starters and have yet again done that this season, I have to admit I wasn’t that surprised with your defeat at Goodison Park seeing as Everton are always although opponent for the so called bigger boys but your defeat at home to Spurs really stood out, especially with your exceptional record against them. Fortunately, you have been helped out by Man City not firing on all cylinders either (yeah I’ll take the Thanks on behalf of Tony) but your victory last time out may have settled some nerves and I expect you to kick on with your season now (Well after our trip anyways)

L R: I can’t really say I like the guy personally, I guess that is just because of my dislike for your side BUT I do admire his ability and what he has done for your club and how he has continued with such hunger, for such a long time. He always seems to take every hurdle in his stride and bring in fresh players to replace players that seem irreplaceable. His latest task is to overthrow Roberto Mancini, which I think he will do with ease as he has done with managers who have more ability than Mancini such as Wenger (ew) and Mourinho,

T R: Michael Owen, your brief thoughts on him please?

L R: If we can keep him fit I think he will be an absolute steal. He is the sort of player we have been crying out for since our promotion. I think he could get into double figures this season if he can get a run in the team.

TR: Where do you think Manchester United will finish in the Premier league?

L R: I personally think you will win the title this season and overthrow the noisy neighbours.

TR: This is your 5th consecutive season in the Premiership with a 12th, 11th, 13th finish previously. Do you think Stoke can improve upon last season’s 14th place league position?

L R: I think we will finish in the top half this season. We are starting to evolve our play and we will start to pick up more points away from home, whilst continuing to maintain our strong home record.

TR: What are your thoughts on Tony Pulis he appears to have modeled Stoke into a certainty to stay in the Premiership.

L R: Pulis’ first spell at Stoke was slightly a drab affair and a lot of people didn’t want him back but he did and I’m so glad he did. He exploited the loan market to get us promoted and was then shrewd in the transfer market to keep us in the league. TP has a knack of getting rid of players just at the right time and upgrading to a similar player who has the same ethics to create a tight knit squad. He has kept us in the league, took us to our first FA cup final and even a European adventure! Not too shabby I guess.

T R: The key players for Stoke that Manchester United will have to watch carefully on Saturday.

L R: Peter Crouch will be our key player, he puts in a real shift up front, and he does a lot of work that does go un-noticed. He does a lot of closing down, and donkey work such as controlling tempo by holding the ball up well, putting defenders under pressure and winning flick ons. He also has a knack of grabbing a goal or two consistently, which is always pleasant.

TR: The last 4 occasions you have visited Old Trafford you have left with zero points, conceded 13 goals and scored one. Are you fearful for tomorrow?

L R: Got to always fear going to one of the bigger teams home grounds but after our recent displays over the other bigger teams, I think we will put up more of a fight this year.

T R: Fantasy time; you have a choice of three of Manchester United players to move to Stoke.

L R: I’m going to try and keep the players realistic who I would choose, I would love to see a player like Paul Scholes down the Brit and think he would fit in well. Tom Cleverly is also an exciting prospect who would add to our evolving midfield and finally Antonio Valencia, as I like his work rate and directness.

TR: Tell us the players that we may not be aware of, under the spotlight likely to break through to Stokes first team.

L R: We have a few decent players who are currently out on loan such as young Belgian Florent Cuvelier who is setting League One alight at Walsall, whilst young striker Ryan Brunt is doing well at Leyton Orient. Having just been granted planning permission for our new state of the art youth complex, expect to see a few more players such as Ben Foster come through our ranks in years to come.

T R: Stoke have a fantastic vociferous loyal support at the Britannia Stadium .Who are the best away supporters to visit.

L R: Yourself, Man City & Newcastle always fill the away end and never stop singing throughout the game and is too close to call.

L R: Well it seemed like we started this certain trend off when we were back in League One as it is christened now. I think if you can get the right sounding name for the Stadium e.g. Britannia/ Liberty then it fine but it starts to get a little crude if your ground is the ‘Sports Direct Arena’ as it just doesn’t flow and is just too in your face but I think it will continue to happen as money gets more and more important in the current financial sporting climate.

L R: We have got a commemorative kit with a special badge and the dates emblazed on them along with our away kit reverting back to our initial ‘Stoke Ramblers’ colours which we will be wearing at Old Trafford. We have also been having special match day programmes with half of the programme being from when the two teams first meet in the clubs history. All nice touches really. The club seem to be keeping certain surprises and celebrations under wraps but it will definitely be a season to remember.

T R: Was the Europa League competition a distraction from the league and other domestic tournaments last season.

L R: Well personally I really enjoyed as I managed to go to Besiktas and Valencia, but now I look back on it, I guess it did stifle our league form slightly. I would love to be able to go watch Stoke abroad again though.

T R: Stoke netted only 36 goals last season, the lowest of all the Premiership teams. Why?

L R: We simple didn’t create enough chances, at times last season it was like we didn’t have a midfield and TP realised this and heavily adapted it in the summer.

T R: Do you see David de Gea as a weakness with Stokes ability to overload bodies into the box, blocking of the opposing keeper, particularly at set plays and throw ins?

L R: Troubled keepers always seem have great games over us, just like De Gea did last season against us, I see your real weakness as your central defence, especially Rio Ferdinand who was terrorised by Peter Crouch last season on our patch. He hasn’t aged well and he hasn’t got his pace to fall back on to now.

T R: Tell us about your Club captain Ryan Shawcross. He almost made his debut for the three lions against San Marino as an unused substitute. Shawcross would have been, will be, the first Stoke player to represent England in 28 years.

L R: Ryan has developed so much in his time at our club and was clearly in high esteem at Old Trafford with SAF forcing a clause in his transfer that he would have first option on the player if he was to move away from the Britannia Stadium. Ryan is so level headed and a model professional, who will surely get his first England cap soon. He is an ideal replacement for John Terry as he is built in the same no nonsense style mould as the former England captain.

L R: My heart says we can grab a draw but my head says we will lose to a late goal after fighting hard all game.

T R: Go with your head Lloyd , thanks for the excellent answers . 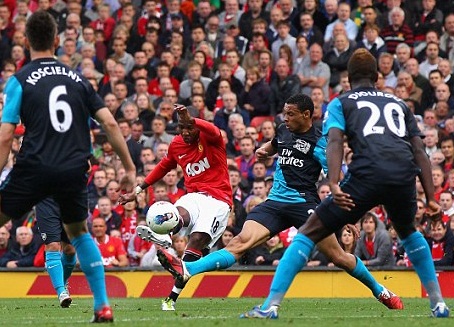 Stoke have not won a point in 32 years at Old Trafford.

Sir Alex Ferguson had this to say in his pre match press conference ” It’s always hard to play Stoke because they play a different kind of football to most teams in the Premier League .They are very physical and have very strong players . It’s also difficult because most of the game is in the air. We need to be strong and play our game.”

Key danger-men: Peter Crouch – the “Jolly Green Giant” has been in sparkling form so far this season.

Ashley Young will be available after a two month absence with a knee injury.

The manager had this to say on Young: “The opportunities are there for him. Ashley has the opportunity to win things here. I don’t think that’s lost on him. I’m sure during the time he’s been out he’s been thinking about that. That is what players do when they’ve been out, they start thinking about what should have been and what can be for them.”

“That will hopefully surface as the season goes on.”

Who will win on Saturday?