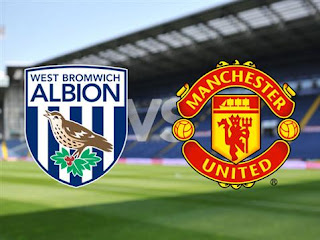 As the season enters its final furlong any number of teams can still end up in one of the coveted top four spots needed for Champions League qualification. However, it looks increasingly more certain that Man United will not be one of them following this demoralising defeat in the West Midlands.

After winning their last four matches on the trot United went to The Hawthorns with a proud record of having never lost a Premier League match there and was buoyed by the return of centre-back Smalling to hopefully boost their rear guard.

Van Gaal made four changes from the side that laboured to the win over Watford in midweek. At the back, Darmian and Smalling replaced Varela and Fosu-Mensah. In midfield, Carrick returned to give Schneiderlin a well-earned rest and Lingard came in for Memphis. Starting XI: De Gea, Darmian, Smalling, Blind, Rojo, Carrick, Herrera, Lingard, Mata, Martial and Rashford.

Teenage sensation Rashford was given another start up front and an opportunity to combine with Martial yet again. Fellaini returned from injury and started on the bench.

The first effort of the match fell to Martial after a couple of minutes with a long range effort to test former United keeper Ben Foster which the former Red collected easily.

United started the match well from the kick off by utilising Darmian’s pace on the right to good effect as he provided some early pressure. Rashford started as the main striker with Martial positioned on the left and Lingard on the right with Mata linking the midfield and attack.

The visitors almost produced the opening goal as Mata linked well with Herrera, who tried to play his compatriot in on goal with a chip over the defence but slightly overhit his return pass.

It was then the turn of the home side to test the visitors resilience with a couple of high balls into the area which were dealt with well by Smalling and Blind. There was a chance for Dawson, who rose above United’s defence only to get his header all wrong.

Blind failed to clear his lines and the poor clearance ended up at the feet of Berahino who let the ball run away from him and the chance had gone. The Dutchman was in the thick of the action again as his foot was too high as it connected with Berahino’s face. A free kick was awarded right on the edge of the penalty area. Martial was back in defence and helped to clear the resulting free kick.

There was a scare for United as another free kick was floated towards the far post where McAuley stormed in and headed the ball across the face of goal with De Gea stranded. If the ball had gone in it wouldn’t have counted as the flag was already raised for offside. 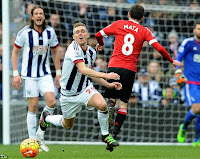 Then just before the half hour, a couple of rash decisions by Mata turned the game on its head. Firstly, he didn’t retreat the full ten yards from a Fletcher free kick and was booked. Secondly, a few minutes later he went late into a tackle on Fletcher and caught the former United player for which the referee had little choice but to issue a second yellow and, therefore, Mata had to walk.

It has to be said that both yellows were needless from Mata and he should have known better as it put United on the back foot so early on in the match. It was also United’s first red card of the season and the Spaniards first in the Premier League. 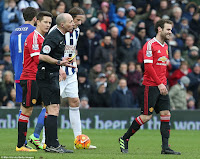 Dawson had another chance this time with a dipping shot that only just dropped wide of the post.

As the first half came to a close, it was the Baggies who dominated as United tried to regroup after Mata had been dismissed. Martial did manage to work himself into a shooting position inside the box, but he took too long to adjust himself.

Lingard engineered a good break down the left wing and earned a corner for his troubles on the stroke of half-time.

0-0 after 45 minutes and a half that was all about Mata’s carelessness and less about the football. Even though West Brom created more chances they were mainly from high balls played into the area looking for either Rondon or Berahino which were dealt with without too much concern by the back four.

United created little of note before and after Mata saw red and an improvement in the second half would have to be found from somewhere if they were to gain the three points they badly needed. It would be an uphill struggle but not impossible. The biggest question was how van Gaal would reorganise his ten men for the second half.

The home side got the second half underway as van Gaal decided against making any changes and it was United that started on the front foot. They earned a corner from a Rashford shot following a great trademark twisting run into the penalty area by Martial. Better from the Red Devils now if they could only make the pressure count with a goal.

A couple of corners for United followed by a big appeal for handball against Gardner after he clearly handled a Rojo cross was waved away by the referee who was standing only a few yards away.

Lingard, who scored his first United goal against the same opponents at Old Trafford, tried his luck from distance and wasn’t that far away. 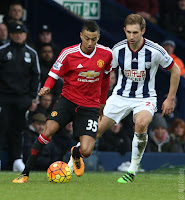 It was all United at that point as Martial was upended just outside the area. Herrera fired the resulting free kick into the wall. Martial was proving to be a pain in the home side’s defence as his pace and trickery caused problems for Olsson especially.

Then the first change was made by van Gaal just after the hour mark when Herrera made way for Schneiderlin in midfield.

Not for the first time this season, the away fans were in fine voice, but they were silenced in the 66th minute when West Brom took the lead through Rondon, who blasted a low left-footed drive past the despairing dive of De Gea. Exactly how Rondon escaped his marker to score only Blind can answer.

An uphill struggle suddenly looked like a mountain to climb for United who found themselves 1-0 down and with only ten men. From this point on United struggled to mount a reply against The Baggies.

Daley Blind was having a nightmare of a game against scorer Rondon and found it hard going against the robust forward.

Memphis was given a chance to rescue his team when he came on for Rashford for the final fifteen minutes. His first piece of action saw him brought down in a dangerous position. He also took the free-kick which evaded everyone inside the area.

Fosu-Mensah became the last change by van Gaal when he replaced Darmian at right back as the game entered the final ten minutes. It was a like for like change and even if Darmian had an injury then surely it would have made more sense to put on a player who could do more damage up front. A gamble on Fellaini’s height maybe as the game neared the end.

The signal for four minutes of added time failed to spur United into anything close to a chance on goal and the match ended in another disappointing result for van Gaal’s side.

There were many performances to forget, especially from Blind and Carrick. The latter created nothing from his holding position in midfield and spent most of the match following the goal passing backwards or sideways when the Carrick of old would have tried to pick out forward players with his passing ability. Those forwards also missed Mata’s vision for the majority of the match and struggled to have any bearing on the result. Herrera was of the boil as were most of the team.

This was a defeat that could signal the end of a top four finish for United and more worryingly next up is the small matter of the first of the double header against bitter rivals Liverpool in the UEFA Europa League last 16. It will be the first time the two giants of English football have pitted their wits against each other in European football.

We can expect two matches of heated rivalry on and certainly off the pitch as both sets of players and supporters will not give an inch to each other.

With the second leg at Old Trafford, you would expect United to come out on top over the two legs as van Gaal’s record of never having lost against the Anfield outfit bodes well. But after this result who knows what will happen.