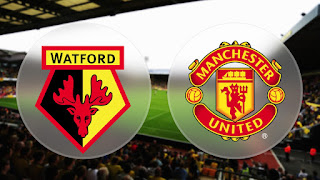 After what has been an emotional week it was a return to the Premier League for Manchester United and an early kick off against newcomers Watford at Vicarage Road in which they showed a collective team spirit to come away with all the points.

There had been a question mark as to whether the friendly against England and France should have gone ahead, but it did and of course it was inevitable that a United player would pick up an injury and true to form they did as Anthony Martial left Wembley hobbling on a pair of crutches and Michael Carrick withdrew from the England squad with an injury.

Wayne Rooney did manage to notch up another goal for England and United badly needed him to continue that form in the absence of Martial, however, he was hit by an illness.

The bottom line was that Louis van Gaal had the hard task of putting out a side that could provide the firepower needed to overcome a Watford team who must have been delighted to hear of the visitors’ injury woes.

With the lack of goals a problem during the last month the question was who the manager would play in attack to compensate for the missing players. In the end he decided to put out a starting XI consisting of: De Gea, Young, Smalling, Jones, Blind, Schneiderlin, Schweinsteiger, Herrera, Mata, Lingard and Memphis.

Subs: Romero, McNair, Pereira, Rojo, Goss, Darmian and Rashford. The manager continued to blood young players by including Goss and Rashford in the squad.

The absence of United’s two main strikers meant a return to the side for Memphis Depay and a chance for him to turn his season around after starting the campaign brightly only to be hit by a lack of form and it has to be said confidence. There was another opportunity for the man of the match in the last two outings, Jesse Lingard along with recalled Ander Herrera.

The choice of the back four was a little surprising with Young and Jones included at the expense of Rojo and Darmian who were both on the bench.

After both sets of players and fans stood together for a rendition of the French national anthem United started the match with the away fans once again in superb voice with their own chorus of Ooh-ahh Cantona and the players responded by attacking straight from the kick-off.

United started the game with a forward line composed of Memphis as the main striker flanked by Lingard and Mata with Herrera slotting in at No.10.

The home side tried their best to help United out with their striker crisis as Nyom almost sliced a clearance into his own net.

A bright start by the visitors who looked to attack whenever they had the ball and it was encouraging to see them do it at pace.

It didn’t take long for Memphis to remind people that he wasn’t a spent force after he volleyed United into a deserved lead in the 11th minute following a great cross into the box by Herrera. The way that Memphis waited on the shoulder of the defender before blasting the ball home was the stuff of a seasoned forward.

It was a start to the match that we haven’t seen from United much this season a start full of pace, inventiveness and hunger provided by the improvised front line backed up by the midfield.

Watford did have an opportunity to equalise after United gifted them possession in midfield and gave them a two on one advantage, but the final strike by Ighalo was way off target which is no surprise as it’s not the first time the Watford forward has bottled it under pressure this campaign.

Herrera’s day ended early in the 24th minute when he pulled up with a hamstring problem and was replaced by Rojo which meant van Gaal had to reshuffle the team with Young switched to midfield, Rojo slotted into the center back spot and Jones moved to right back.

Schneiderlin had two chances to add a second the first when he almost smacked in a superb volley at the far post that was just inches over the bar and the second when he just failed to connect with a corner that was whipped into the area.

Exciting play from United but a second goal was needed to put the game to bed.

Memphis’ new found confidence was on view as he tried his luck from distance which the keeper had to dive at full stretch to turn away for a corner.

An entertaining half by the visitors who fully deserved their lead in the match after controlling all positions on the park and even after the early departure of Herrera they didn’t let up with the attacking play supported by the midfield with Schneiderlin in brilliant form and it was the Frenchman who could have ended the half with at least two goals.

United got the second half underway and immediately went on the attack as Memphis played in Lingard whose effort was saved by Gomes. Even Schweinsteiger tried his luck with a dipping drive that wasn’t that far away.

Watford’s Deeney tested whether De Gea was fully awake with a rasping shot that the keeper had to use both hands to save. This was the Hornets best period of play just before the hour mark and Schneiderlin had the awareness to block an effort in front of his keeper. United at this point badly needed a second goal.

After an hour, United’s play had gone slightly off the boil and Watford began to creep more into the game and the home fans, who had been quiet, began to get behind their team.

They were almost silenced again as Mata broke forward and played a neat pass to Memphis, who after positioning himself shot wide of the far post when a pass to Lingard looked the better option.

Phil Jones was replaced by Paddy McNair for the final twenty minutes after it looked like Jones had succumbed to yet another injury.

Straight after the change De Gea proved once again why he is considered the best keeper in the world by making an unbelievable low reflex save down at his near post after a shot had been deflected goalward by Smalling. Truly world class goalkeeping by the Spaniard.

Young was cautioned on his return to his former stomping ground for a cynical foul as Watford looked to be on the break. The safe hands of De Gea came to the rescue again as he held on to a thunderbolt by that man Feeney from outside the area.

After all the attacking verve of the first half, this was turning out to be a nervy ending from United and if not for the outstanding saves of the keeper it could have been a very different story. With twelve minutes on the clock van Gaal pulled off Mata and brought Pereira into the play.

Then in the 85th-minute drama as Watford were awarded a slightly dubious penalty after Rojo was adjudged to have brought down Ighalo. Up stepped Deeney who smashed the spot kick past De Gea to equalise and set up a grandstand finish to the game.

United immediately went in search of the winner and Gomes came to the rescue when he acrobatically made a fingertip save to deny an impromptu back heel from Smalling.

In the next attack, the ball fell to Lingard, who was on the left of a crowded box and his snapshot was parried by the keeper only into the path of Schweinsteiger who showed great determination and managed to reach the ball and squared it back across the goal where it was bundled over his own line by Deeney. Justice had been done and the pure delight on the German’s face as he ran away in celebration told the whole story as did Herrera’s celebration in the dugout.

Game over and a valuable three points plucked at the death of a game that should have been wrapped up a lot sooner than it was.

United clearly coped brilliantly for the majority of the match with so many missing players and looked fluid in their movement until Herrera left the play and then they started to stutter a little. To be honest, the only player who could have slotted easily into the team’s makeup would have been Martial.

Smalling, Rojo and Blind performed to their usual high standards and were for the most part in complete control of any attacks Watford mounted. In the midfield Schneiderlin and Schweinsteiger had by far their best match together in United’s colours. Memphis and Lingard put in morale-boosting performances up front, but they obviously tired towards the end after non-stop running.

However, the man of the match has to be David De Gea who produced saves of such high class that they had to be worth at least a couple of goals.

At the end of the drama United sat at the top of the league table if only for a short time and the last five minutes of the match brought back memories of days gone by. It was nice to see the team fight to the death and then celebrate with such aplomb and togetherness. Long may it last.